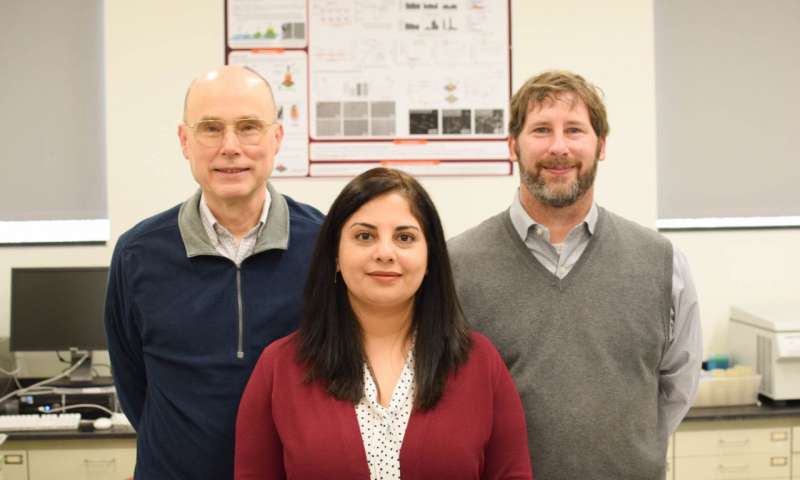 The conventional cancer treatment method of injecting nanoparticle drugs into the bloodstream results in low efficacy. Due to the complexities of the human body, very few of those nanoparticles actually reach the cancer site, and once there, there’s limited delivery across the cancer tissue.

The new system created at Virginia Tech is known as Nanoscale Bacteria-Enabled Autonomous Drug Delivery System (NanoBEADS). Researchers have developed a process to chemically attach nanoparticles of anti-cancer drugs onto attenuated bacteria cells, which they have shown to be more effective than the passive delivery of injections at reaching cancer sites.

NanoBEADS has produced results in both in vitro (in tumor spheroids) and in vivo (in living mice) models showing up to 100-fold improvements in the distribution and retention of nanoparticles in cancerous tissues.

This is a product of the five-year National Science Foundation CAREER Award of Bahareh Behkam, associate professor of mechanical engineering. Collaborators on this interdisciplinary team are Rick Davis, professor of chemical engineering, and Coy Allen, assistant professor of biomedical sciences and pathobiology in the Virginia-Maryland College of Veterinary Medicine.

「You can make the most amazing drugs, but if you cannot deliver it where it needs to go, it cannot be very effective,」 Behkam said. 「By improving the delivery, you can enhance efficacy.」

Humans have noticed, even as far back as Ancient Egypt, that cancer went into remission if the patient also contracted an infection like salmonella. Neither are ideal, but humans can treat salmonella infections more effectively than cancer.

In modern times, Allen said the idea of treating cancer with infections traces back to the late 1800s and has evolved into immunotherapy, in which doctors try to activate the immune system to attack cancerous cells.

Of course, salmonella is harmful to humans, but a weakened version could in theory provide the benefits of immunotherapy without the harmful effects of salmonella infection. The concept is similar to humans receiving a weakened flu virus in a vaccine to build immunity.

Over six years ago, Behkam came up with the idea of augmenting bacterial immunotherapy to also attack cancer with conventional anti-cancer drugs. The problem was the passive delivery of anti-cancer drugs doesn’t work very well.

Given her background in bio-hybrid microrobotics, she wanted to use salmonella bacteria as autonomous vehicles to transport the medicine, in nanoparticle form, directly to the cancer site.

The work began with Behkam’s first doctoral student, Mahama Aziz Traore, constructing the first generation of NanoBEADS by assembling tens of polystyrene nanoparticles onto E. coli bacteria. After thoroughly studying the dynamics and control aspects of the NanoBEADS systems for a few years, Behkam brought Davis into the project because he had experience creating polymer nanoparticles for drug delivery.

「She mentioned this radically different approach for delivering drugs and nanoparticles,」 Davis said. 「I walked away from the conversation thinking, 『Man, if this thing could work, it would be fantastic.'」

Behkam chose this particular bacterial strain, Salmonella enterica serovar Typhimurium VNP20009, because it has been thoroughly studied and successfully tested in a phase one clinical trial.

「Its (salmonella’s) job as a pathogen is to penetrate through the tissue,」 Behkam said. 「What we thought is if bacteria are so good at moving through the tissue, how about coupling nanomedicine with the bacterium to carry that medicine much farther than it’d passively diffuse on its own?」

NanoBEADS agents are constructed by conjugating poly(lactic‐co‐glycolic acid) nanoparticles with tumor‐targeting Salmonella typhimurium. NanoBEADS enhance retention and distribution of nanoparticles in solid tumors by up to a remarkable ≈100‐fold, through intercellular (between cells) self‐replication and translocation. This transport enhancement is achieved autonomously, without the need for any externally applied driving force or control input. Credit: Virginia Tech

Description of graphical element: NanoBEADS agents are constructed by conjugating poly(lactic?co?glycolic acid) nanoparticles with tumor?targeting Salmonella typhimurium. NanoBEADS enhance retention and distribution of nanoparticles in solid tumors by up to a remarkable ?100?fold, through intercellular (between cells) self?replication and translocation. This transport enhancement is achieved autonomously, without the need for any externally applied driving force or control input.

Although Behkam had a vision for the new drug delivery system, it took several years for it to become reality.

「The process of creating nanoparticles and then attaching them to bacteria in a robust and repeatable manner was challenging, but add on top of that ensuring the bacteria stay alive, discovering the mechanism of bacteria transport in cancerous tissue, and devising ways to quantitatively describe the effectiveness of NanoBEADS, and this was a difficult project,」 Davis said.

「We collaborated to make these particles, and we attached them to the bacteria,」 Behkam said. 「Then the question was what is the mechanism of their translocation in the tumor? How far do they go into the tumor? How do we present a quantitative measure of their performance?」

Behkam along with Suh and current doctoral student Ying Zhan tested their nanoparticle-attached salmonella in lab-grown tumors. They found up to 80-fold improvements in nanoparticle penetration and distribution using the NanoBEADS platform, compared to passively diffusing nanoparticles.

Furthermore, Suh and Behkam found out that NanoBEADS largely penetrate the tumor by translocating through the space in between cancer cells.

Behkam wanted to strengthen the NanoBEADS results past the in vitro stage. With a top-flight veterinary school down the road, she enlisted Allen, her fellow MII faculty member, to test the NanoBEADS system in vivo. Tests in breast cancer tumors in mice produced results showing significant improvements compared to passive delivery.

「Most notably, the salmonella itself helped keep the particles in the tumor up to 100-fold better, which would suggest it would be an effective delivery vehicle,」 Allen said.

The next step in the research is to load cancer therapeutics into the NanoBEADS system to test the potential enhancement in efficacy.

From bench to kennel to bedside

The collaboration highlights the diversity of interdisciplinary research possible through MII and Virginia Tech.

「The synergistic integration of diverse expertise has been essential to the high-impact discoveries that resulted from this work,」 Behkam said.

With the addition of the Virginia Tech Carilion School of Medicine and Fralin Biomedical Research Institute at VTC, Allen said Virginia Tech has the possibility to test scientific research 「from bench to kennel to bedside.」

「The project could not move forward without each of the three parts,」 Allen said. 「The study would not have gotten into such a high impact journal without having the chemistry, the background of the pathogen, the idea, and having the physiological and clinical relevance of testing it in an actual tumor in an actual animal model.」

Davis said all drug delivery mechanisms have to go through animal trials, so having an 「absolutely fantastic」 college of veterinary medicine on campus took the research to a higher level.

「One thing that attracted me to this project was the ability to work with people like Bahareh and Coy who work with cells and animal studies to really translate the work,」 Davis said. 「It’s hard to find that combination of people in a lot of schools.」