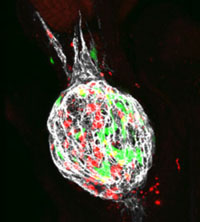 A PhD candidate at Queen’s University has discovered a novel DNA binder that could “switch off” cancer cells and prevent them from spreading.

Through screening numerous chemical compounds, Caitlin Miron, 28, identified one compound that binds to a four-strand DNA structure called a guanine quadruplex that’s associated with cancer and other diseased cells. The compound could be effective in targeting cancer cells and prevent their growth and metastasis. It could also be applied to other diseases including HIV.

In an interview with Global News, Miron described her discovery using an analogy of a single-strand necklace. Most people are familiar with DNA as a double-helix structure, she says, but it can temporarily become a single strand.“It’s incredibly exciting because researchers have been trying to identify DNA binders with properties like this one for more than two decades,” Miron said in a statement. “It’s so new, we’ve had to devise our own techniques for analysing and testing it.”

“Think of a necklace as a DNA chain and imagine beads that move freely down the chain until they hit a knot in the necklace,” she said. “The beads moving down are the cell machinery that’s going to process parts of the DNA, and translate it to proteins that will have [cancerous] effects in cells and tissues.”

Over the course of the last 10 years, researchers have learned that these “knots” form before areas called oncogenes, genes that produce proteins that can contribute to cancer development and metastasis. Unfortunately, the “knots” can be untangled.

“We’ve essentially found a superglue that keeps the ‘knots’ in place and prevents the ‘beads’ from reaching the section of DNA where they can grow and spread cancer cells.”

She says that this compound could also have a high impact on a quadruplex in a part of the HIV DNA that’s responsible for infection.

It is expected that the compound will be ready for licensing by pharmaceutical companies anywhere from two to eight years from now, and early results from the U.S. National Cancer Institute have been positive.

“We are seeing therapeutic benefits in that cancer growth is reduced in some of the cell lines,” Miron said. “The next step is to determine the best way to adapt this compound for use in humans.”

Miron, who has been working under the supervision of Dr. Anne Petitjean at Queen’s University and Dr. Jean-Louis Mergny at the European Institute of Chemistry and Biology in Bordeaux, was honoured with the Mitacs Award for Outstanding Innovation – PhD yesterday in Ottawa. Cancer: 42 percent of cases down to risk factors you can change

Medical News Today–2017年11月21日
These 17 risk factors are called "modifiable" because people can take … were published in the journal CA: A Cancer Journal for Clinicians.
Lifestyle causes four out of 10 cancers in the US, new study finds
深入報導–South China Morning Post–15 小時前