A vaccine effective against a wide range of cancers is one step nearer.
GOMBERT, SIGRID/GETTY IMAGES

A combination of a tiny segment of DNA and a specific antibody injected into a solid tumour has been shown to remove not only the target tumour, but also others in the body, at least in mice.

So confident are they of the effectiveness of their approach, scientists at the Stanford University School of Medicine in the US are this month starting a clinical trial using human patients.

Like several other treatments, the combination therapy, reported in the journal Science Translational Medicine, prompts the body’s own immune system to tackle tumours. However, unlike others, it functions as a one-size-fits-all strategy. To a significant extent, it seems, it is not necessary to first identify the type of cancer involved.

“When we use these two agents together, we see the elimination of tumours all over the body,” says oncologist Ronald Levy, one of the authors of the study.

“This approach bypasses the need to identify tumour-specific immune targets and doesn’t require wholesale activation of the immune system or customisation of a patient’s immune cells.”

Initially the T cells will recognise such proteins on the surface of cancer cells and enter the developing tumour. However, as the tumour continues to grow, T cell activity drops off. In a sense, the immune system gives up.

Levy and his colleagues found a way to reactivate the moribund T cells. To do this, they inject a target tumour with a couple of micrograms of a short stretch of DNA called a CpG oligonucleotide. This works with nearby immune cells to activate a receptor called OX40 on the surface of the T cells.

At this point, the second agent – an antibody that binds to OX40 – comes into action, revivifying T cells, but only those within the tumour. This is important, because the combination effectively generates a cohort of immune cells pre-programmed to attack only cancer-specific proteins.

Once the process is under way, the scientists report, the tumour-hungry T cells leave the initial site and distribute through the body, attacking any and all other similar tumours they find.

“Our approach uses a one-time application of very small amounts of two agents to stimulate the immune cells only within the tumour itself,” explains Levy.

“In the mice, we saw amazing, body-wide effects, including the elimination of tumours all over the animal.”

The therapy has been trialled against several different types of cancers in mice. The first trial involved 90 animals with lymphoma tumours on both sides of their bodies. In each, only one tumour was treated. The paper details that 87 out of the 90 were cured. The cancer returned in three cases, but went into permanent remission after a second treatment.

While the treatment is effective against a range of cancers, each application conditions T cells to fight only one. Tests on mice with two types of tumour found that only the type treated went into remission, leaving the other unaffected.

“This is a very targeted approach,” Levy says. “Only the tumour that shares the protein targets displayed by the treated site is affected. We’re attacking specific targets without having to identify exactly what proteins the T-cells are recognising.”

An initial human trial will get underway soon, with the researchers looking to recruit about 15 patients with low-grade lymphoma. 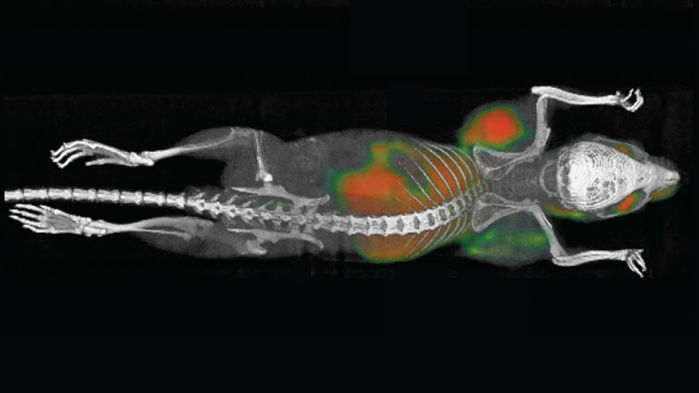 Tumors are growing on each side of this mouse’s body just behind its forelegs.

Our immune cells can destroy tumors, but sometimes they need a kick in the pants to do the job. A study in mice describes a new way to incite these attacks by injecting an immune-stimulating mixture directly into tumors. The shots trigger the animals’ immune system to eliminate not only the injected tumors, but also other tumors in their bodies.

“This is a very important study,” says immunologist Keith Knutson of the Mayo Clinic in Jacksonville, Florida, who wasn’t connected to the research. “It provides a good pretext for going into humans.”

To bring the wrath of the immune system down on tumors, researchers have tried shooting them up with a variety of molecules and viruses. So far, however, almost every candidate they’ve tested hasn’t worked in people.

Hoping to develop a more potent approach, medical oncologist Ron Levy of Stanford University in Palo Alto, California, and colleagues used mice to test the cancer-fighting capabilities of some 20 molecules, including several types of antibodies that activate immune cells. The researchers first induced tumors by inserting cancer cells just below the skin at two different locations on the animals’ abdomens. After tumors started growing at both sites, the scientists injected the molecules, alone or in combination, into one tumor in each mouse. They then tracked the responses of both tumors.

A pair of molecules—a type of DNA snippet called CpG and an antibody against the immune cell protein OX40—produced the best results. “On their own, they do almost nothing, but the combination is synergistic,” Levy says. When the researchers injected the two molecules into mouse tumors, they disappeared in less than 10 days. In less than 20 days, the noninjected tumors had also vanished, the team reports online today in Science Translational Medicine.

The two molecules rouse different immune cells. The DNA snippet stimulates dendritic cells, which help instigate counterattacks against tumors. OX40 functions as a throttle for T cells, another type of immune cell crucial for battling tumors, and the anti-OX40 antibodies rev up these cells.

Levy and his colleagues also tested the approach in a strain of mouse prone to breast tumors. If the animals harbored two tumors, injecting the mixture into one tumor curbed the growth of the second. Moreover, the combo prevented any new breast tumors from appearing.

“We think that this particular combination will be very effective in patients,” Levy says. He predicts that it could work against a variety of cancers. Because the combination destroys other tumors besides the injected one, it might eliminate metastases, or the secondary tumors that result when cancer spreads, he says.

“The data is very impressive, particularly for the uninjected tumors,” says cancer immunologist Drew Pardoll of the Bloomberg-Kimmel Institute for Cancer Immunotherapy in Baltimore, Maryland, who wasn’t connected to the study. The researchers “deserve a lot of credit” for testing the approach in the mice that spontaneously develop breast tumors, he says, which more closely mimic how cancer arises in humans.

The big question is whether the approach works in people, as most rodent cancer therapies don’t translate to humans. Levy and his colleagues are about to find out. They are launching a clinical trial to evaluate the safety of their approach and gauge its effectiveness in patients with lymphoma, a cancer of the lymphatic system.